Amazing! Made my date even better!

Valued guests, Your health & that of our employees remains our top priority. We are actively following all guidelines as they becomes available from the CDC. All sanitation guidelines are being followed w/ heightened focus & awareness. We’ve always prided ourselves on the cleanliness of our restaurants which all have A ratings from the Dept. of Health. Still, we are increasing vigilance & taking the following extra precautions; We are hiring an extra person whose sole focus is to constantly clean during the night w/ antiviral cleaning agents. We have added more hand sanitizing stations. We are checking in w/ staff upon arrival to ensure they are able to work & asking those who don’t feel well to stay at home. Please know we are taking every precaution to prepare your food as safely as is humanly possible! We have re-doubled our sanitizing procedures & are taking safety very seriously. As New Yorkers, we’ll pull together & emerge as a stronger community. -The Mermaid Inn team

Zou Zou’s is a lively and modern Eastern Mediterranean restaurant from chef Madeline Sperling, who spent years working at some of the most notable restaurants throughout New York City, including Gramercy Tavern and The NoMad. Sperling is joined by Juliana Latif, who works with her in the kitchen [the duo met and cooked alongside each other at The NoMad]. Together, they have created a menu inspired by and celebrating the cuisine and flavors of the Eastern Mediterranean region, bringing in influences from Lebanon, Israel, Turkey, Egypt, Syria, and Jordan, among others. Zou Zou’s is located within the Manhattan West Plaza, on the ground level of Pendry Manhattan West. If arriving at 33rd Street (between 9th & 10th), follow the walkway to the plaza, turn left, and find the Zou Zou’s entrance on your left.If arriving at the Ninth Avenue entrance (at 32nd Street), walk through Citrovia towards Whole Foods – Zou Zou’s will be on the right side of the plaza just past the NHL store. 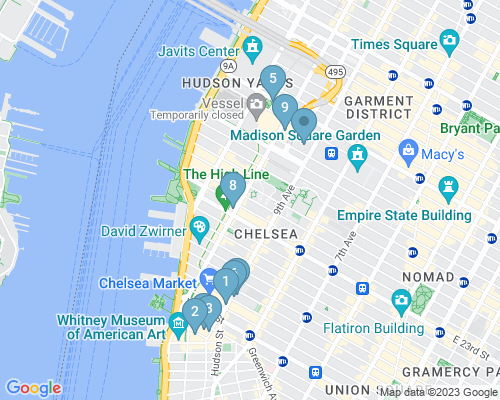