Elephant & Castle Prince Street opened in Lower Manhattan in ’73 across from St Vincent’s Hospital where George had worked as an oncologist since the 1950’s. After two decades of short lunch breaks where he could never get anything he wanted to eat, finally he retired to a life of eating everything he wanted to eat, in his own restaurant with a special name. His passion and obsession for quality was infectious and E&C became a New York classic within a few years. Doors opened in a very different and quiet Temple Bar in January 1989 and by Summer of that year the queues had already started for our fantastic food and spectacular atmosphere! Outside the world has greatly changed, but inside our swinging doors we try to keep things just the way they were.

Luigi Malones Dublin.For food. For fun. For friends.In the heart of Temple Bar since 1997 famous for its freshly made Pasta, Buffalo Wings, and the best Toblerone Cheesecake you will ever try!

The restaurant is in the heart of Dublin’s most fashionable shopping area, spread over 2 floors with al fresco seating. Why not come grab a bite to eat after a day of shopping? 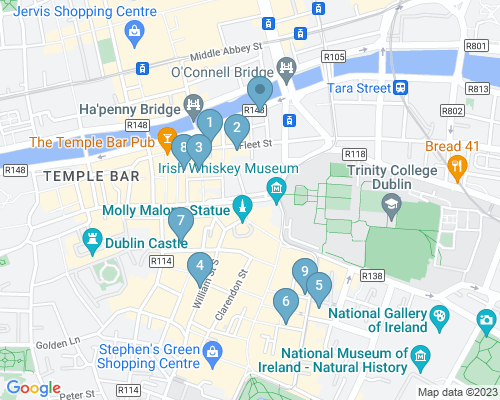